My discoveries about Elixir processes

Learning new language is always challenging, especially if you try to learn something completely different from most of the languages out there. Elixir is one of them, sure it looks like Ruby, but the actual power of it comes from BEAM - VM that powers Erlang programs. The basic unit of Erlang concurrency model is a process. You can learn a lot about them here and there. The thing is, books cover them in a happy path manner. It means, that if copy-paste example from book it will run fine and everyone should be happy right? Well, not exactly. Experimenting with examples is always the most valuable thing that you can do (at least in my case), so I tried, this is what I came up with.

The easiest way to spawn process in BEAM is to do it from shell.

Every resource about Elixir will have such an example. Spawn/1 (there is spawn/3) runs functions in a fresh process and returns its identifier. Cool, but my questions were:

Q: Is this PID is a completely random number?

A: Not entirely, but you have no control over process id number. I found good stackoverlow answer to that one

Q: Can this function take any argument?

A: No, no arguments if you run process like that. You can do it in spawn/3

Q: Is it a async operation, will the “spawner” wait for this process to finish?

Shell will be available immediately, so the answer is “NO” - spawn won’t wait for this process to finish.

Q: So is this process even alive?

I mentioned spawn/3. If you don’t know what given function does, just type h(function/number_arguments) and you will see something like this:

So this is straight forward. It is worth mentioning that the second argument must be an atom. And the third argument is a list of arguments, so if you want to pass a single list as an argument you need to pass [[:items, :of, :a, :passed, :list]].

We can demonstrate some elixir processes properties during a simple exercise. Lets design a ping-pong table where each side “ping” and “pong” are going to be separate process exchanging messages. It will look like this:

Lets define a module that spawns processes and starts interaction with them. We are going to solve this by incrementally adding code and asking bunch of noobie questions to learn as much as we can. Lets start with a basic process and a start function, we are trying to solve: “iex” :pinging ping process

Function start spawns a ping process and returns its PID. Remember, when spawning a process in module the second argument must be an atom otherwise you can get unexpected result quite hard to debug later. In our case, if we call spawn(__MODULE__, ping, []), we would not spawn a process but call a ping function instead, which would block forever at receive statement. Fortunately we have correct implementation so we can try it:

It looks good, PID is alive and well. Now it is time send a message to it, lets do it a few times and realize that after sending a first message our process is dead.

Process is dead because after receiving message is continues executing a function, in our case it is the end statement. Adding recursive call to itself would keep ping process alive.

Q: This is a recursion, am I going to overflow stack in this way?

A: No, elixir uses something called tail-recursion - it basically means that elixir will convert this recursive call to a loop during compilation. We can actually check if that’s true.

We are going to use a tool called observer. 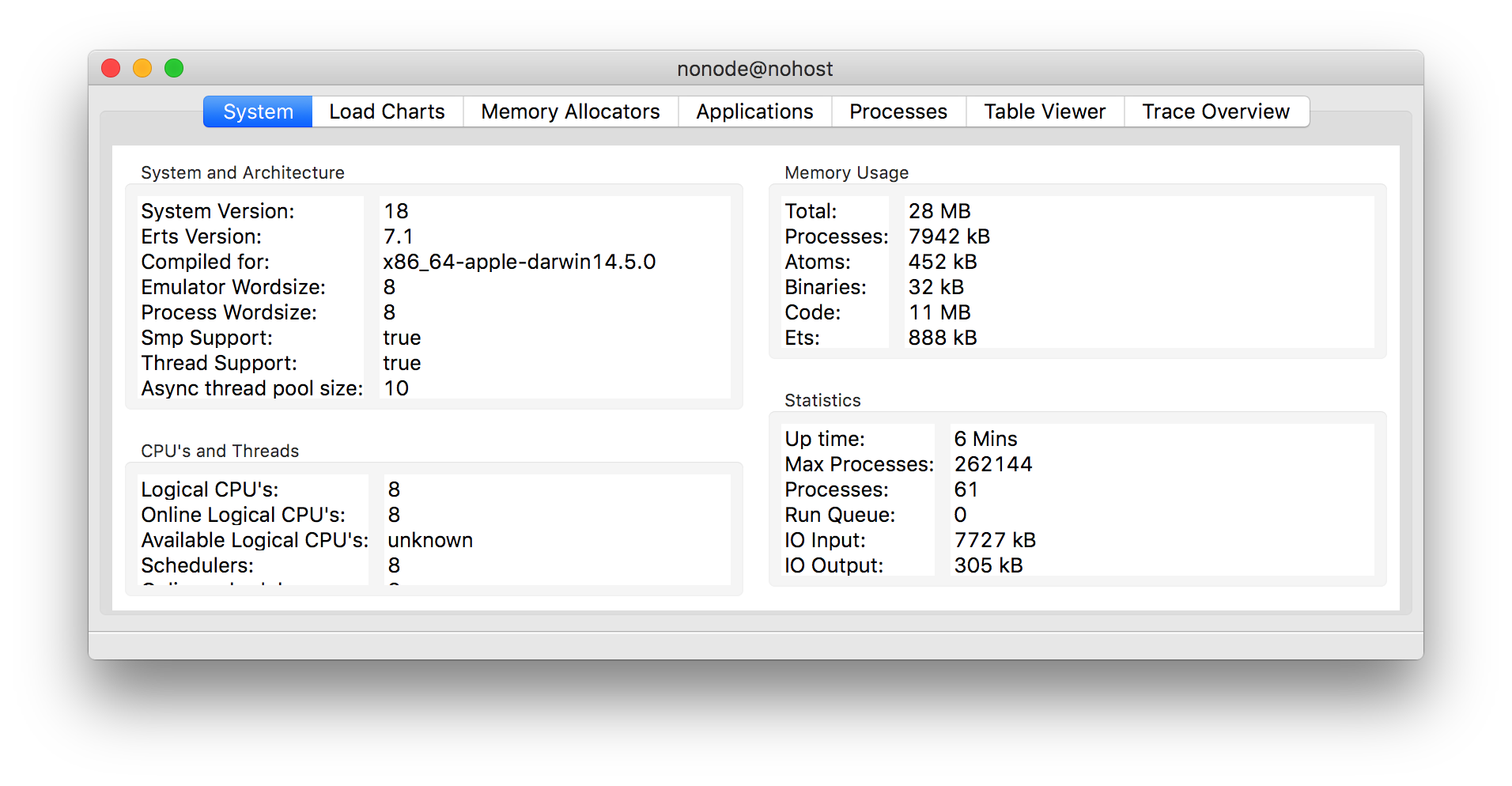 Go ahead, click around and explore. Especially applications tab is interesting. You can peek and check process trees. Now we are ready to benchmark our ping process, we are going to call it 100M times, just type following line and go right to observer window.

Go to Load Charts. Memory usage will increase at first, but it at some point it should be constant during our micro benchmark execution. 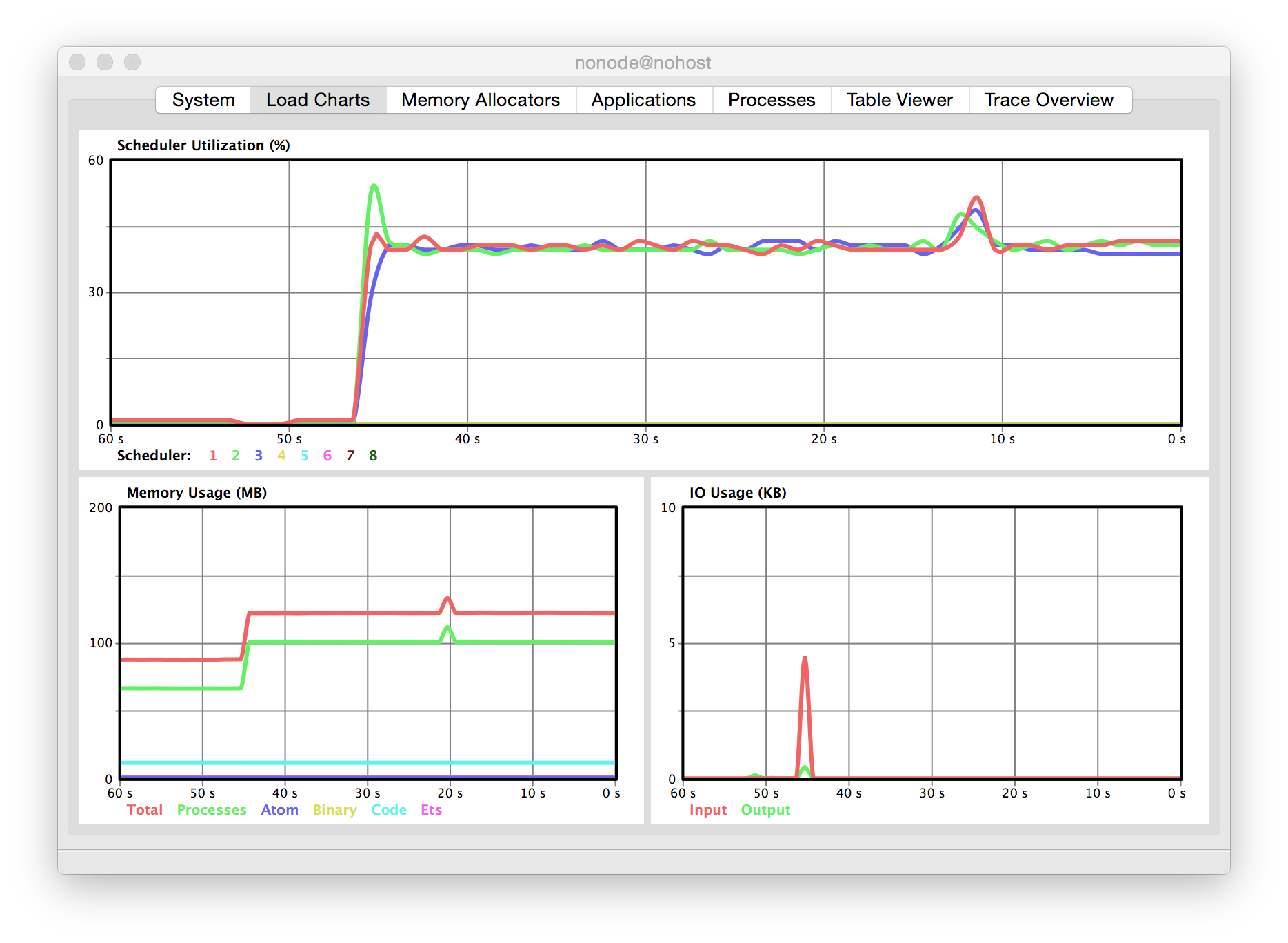 You can also check in processes tab how our ping process is doing.

Before we begin implementating interaction between processes, lets try something new.

What did we learn here? First of all, code that we execute in a REPL is executed in a process as well. We also know how get a PID of process that we are currently in. Lets dig a bit deeper now by sending messages to self() process in REPL, make sure you have running observer first.

We sent messages, but did they go? Lets check process tab in observer, sort the table by MsgQ which says how many messages are waiting in queue to given process. We sent 4 messages so are looking for a process with MsgQ equals 4.

You can see that we sent 4 messages to self(), and queue is 4 items long. Remember, it is not permanent queue, once you kill the VM messages will be lost. Now it is time receive these messages, for this we are going to use flush/0 function. You can even peek what items are in queue, just double-click on a process and go to messages tab. 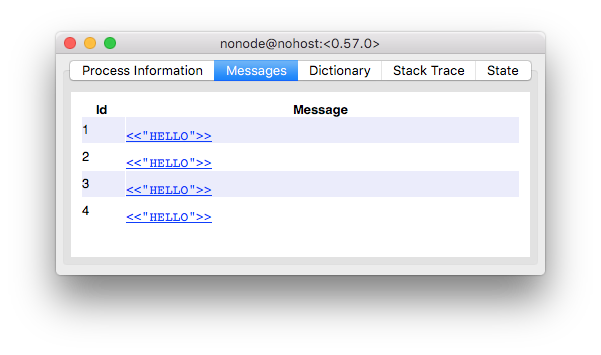 But how to consume messages sent to shell process?

No that we know a bit more about self function, lets try it in our ping-pong table!

Sending messages back and forth between processes⌗

By far we were receiving messages in a process, but to we didn’t send any messages back yet. IO.puts is a useful function, but we want our process to communicate. Lets try example below.

We changed the way what we receive in #1, instead expecting a :ping atom we wait for a tuple {from, :ping}. It means, that we will know not only that someone sends us :ping, but also who is sending it. In #2 we respond in the same manner, we send a tuple back to the sender of the :ping atom, but also with the information who is sending it - the ping process - self(). Now, since we know how self() works, we can test our ping process from a shell.

First we spawn ping process in start function #1, it returns a PID 0.80.0 of the ping process. Then we send tuple of {self, :ping} to ping process (#2), at #3 we can see what has been sent. The #4 is the message sent back from ping process. We are very close to the finish now. All we have to do, is to create similar function to ping process called pong. Example bellow does the job.

The pong function (#1) is very similar to the ping one. The main difference is that we expect :pong instead of :ping atom (#2) and we respond with :ping - not :pong (#3). I also put a :timer.sleep(1000) to hold execution for a 1 second (#4), just to avoid flooding ourselves with messages. If you want to call some code from standard Erlang library, just use it like :module_name.function. We also had to add pong_pid = spawn MODULE, :pong, [] in #5 to actually create a pong process, lets play with what we have.

At #1 we pattern match what Table.start function returns - {ping, pong} PIDs. Now it might get a bit confusing, we send {pong, :ping} to ping - why didn’t we send {self, :ping} like before? It is because we want ping process to think that pong is sending the message, so we to have lie to ping process at first, remember that graph?

Q: But how to stop this “printing pong process reached, going to respond with :ping” ?

A: Just kill one of the process - ping or pong.

It is easy, first check: http://elixir-lang.org/docs/v1.0/elixir/Process.html#exit/2

So, ping is dead, but pong should be still alive, lets check it

That is it, hope you learned something new!